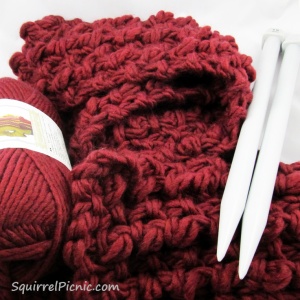 I love this time of year. It’s so much fun digging out all the scarves, hats, and mittens. This year, I’m digging way back to December 2012, when I posted the pattern for a Super Comfy, Super Quick Knit Scarf. As I’ve mentioned before, I’m not a fast knitter. Right now I have three knitting WIPs that have been on the needles for over a year (one of them a sweater in laceweight yarn–what was I thinking?). Because I’m so slow, bulky yarn is a dream come true for me because with it you can finish a project in a weekend, or like this scarf, in an afternoon.

The Super Quick scarf was my answer when I needed to bring a gift to a party and I only had one day to do it in. Using size 35 (19 mm) knitting needles, bulky yarn that is doubled up, and a fairly simple stitch pattern that is repeated for every row makes this a pattern that should fly right by.

Well, some knitters didn’t quite have the experience I had expected. And revisiting the pattern this week, I could see why. It’s a weird stitch pattern–not too complicated, but just different. So I decided to go back and create a step-by-step photo tutorial for the pattern. I’m hoping that this will help ensure that anyone who starts this scarf project will have it done in time to give it to someone special this Christmas, or for them to wear it themselves at the first snow.

I discovered while knitting the swatch for this tutorial that this scarf is so much fun! Once you get the knack of the stitch pattern, the needles just start to fly. And because of the bulky yarn and large knitting needles, I knit this whole swatch in about twenty minutes! The texture is so unique and the fabric is thick and luxurious. Now I want to knit one for myself. I think I know what will be on my needles as soon as I’m done with the book. And this will be one of those rare knitting projects that isn’t sitting in a bag for a year before I finish it.

So pick up some giant knitting needles and some bulky yarn and whip up this scarf for Christmas! You still have time to make it.

Spring, how we have missed you! I put the spring banner back up for the blog header a whole month early because the snow and cold temperatures were starting to depress me. I hope that, wherever you are — even if it is warm there — you have enjoyed the image of Hodge and Podge having a little picnic in their garden.

I get a lot of requests from people around the world for the patterns to make the items in this banner. What better time than the first day of spring to share with you where you can find the patterns to make some lovely flowers, birds, and butterflies. END_OF_DOCUMENT_TOKEN_TO_BE_REPLACED

Looks like Hodge and Podge are already relaxing in the sun, while I’m still here stuffing my luggage full of yarn. It’s about time I join them for some much-needed R & R.

But don’t dismay, we’ll be back just in time for some Halloween fun. Join us on October 23 for an in-depth look at some of the creepiest crochet on the web and on October 30 for the very first Squirrel Picnic Halloween Comic!

I was so busy this summer that I really didn’t find any time to play outdoors, so now that it is fall — my favorite time of year, hands down — I’m committed to getting outside and taking advantage of all that this season has to offer.

Autumn is a great time to explore the outdoors, and there’s no better place than colorful Colorado! Okay, I’m more than a little biased on that one. I’m sure many of you heard about the devastating floods we had throughout the Front Range last week. Although communities both on the plains and in the mountains were greatly affected and recovery efforts are ongoing, some parks, and the roads up to them, are still open. Here are some of my favorite parks that are currently open for business: Golden Gate Canyon, Rifle Falls, and White River National Forest. I would still recommend calling ahead as conditions could always change.

We’re looking forward to spending a night beneath the stars and pines later this month and hopefully get in a good hike too. Though I prefer hiking to skiing and snowboarding, it won’t be long before snow season is upon us, and from what I’ve heard, this could turn out to be a record-breaking ski season for Colorado.

It’s a bit of a sin to mention the S-word so early in the year, so I won’t get too far ahead of myself. While we’re here, I’m going to love the heck out of autumn! It’s the season for harvest festivals, amber sunsets, and of course, fall foliage (in some areas, the aspens are starting to turn!). And for the squirrels, it’s the season of acorn hording and — from the looks of Hodge and Podge — falling in love.

I hope you enjoy the new fall banner. In case you’re interested in making any of the components, here is a list of patterns and materials I used.

Oak Leaf
Made using the pattern in 100 Flowers to Knit and Crochet by Lesley Stanfield
with Vanna’s Choice by Lion Brand yarn in Rust.

Maple Leaf
Made using the pattern in 75 Birds, Butterflies & Little Beasts to Knit and Crochet by Lesley Stanfield
with Vanna’s Choice by Lion Brand yarn in Brick. 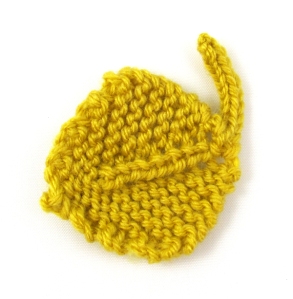 Aspen Leaf
Adapted from the large leaf pattern in 100 Flowers to Knit and Crochet by Lesley Stanfield
with Vanna’s Choice by Lion Brand yarn in Mustard.

Acorns
Made using my own pattern
with Vanna’s Choice by Lion Brand yarn in Chocolate and Bernat Satin in Sable.

Heart
Made using a pattern by K and J Dolls with Caron Simply Soft in Red.

Squirrels
Made using my own pattern
with Bernat Satin in Sable for Podge and my grandma’s old yarn in brown for Hodge.

You may find it interesting to know that I don’t spend my days playing with yarn. As much as I would love to do that, I need a full-time job to support my yarn habit. I work in the editorial department of a greeting card company and do most of my knitting and crocheting on my two-hour round trip commute. And don’t worry, although I once saw a driver knitting behind the wheel, I’ve never tried it. I’d rather take the bus.

Anyone who’s traveled with a yarn project can tell you the importance of having a good kit to hold your project and supplies. Whether you’re commuting by bus like I am or you’re packing for a summer vacation, here are some articles to help you get organized so you can take your skills on the road, and read on to find out about the kit I finally chose. END_OF_DOCUMENT_TOKEN_TO_BE_REPLACED

This work is licensed under a Creative Commons Attribution-NonCommercial-ShareAlike 3.0 Unported License. So much love and hard work has gone into these patterns, comics, and tutorials, so please respect the Creative Commons Copyright.
Squirrel Picnic
Create a free website or blog at WordPress.com.
Loading Comments...