Hello to Hodge, Podge, Fatimals, Eric, MEAP, Deca Podge, and everyone at the Picnic! 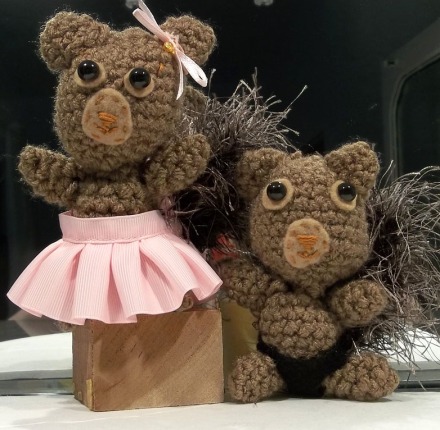 My name’s Andy and I live in Florida, and this is my girlfriend Liv. I’m a swimmer, and my dream is to be on the U.S.A. Animal Olympic Swim Team (yes, there is such a thing). This team is usually made up of aquatic animals. That’s why I want the squirrels to be represented. I want to show the world that squirrels can swim, too!

My tail is trimmed short because it helps me to swim faster. Grace says she’ll make me a shirt soon, and a towel that’s my size. I hope so, because it’s pretty hard to dry off on a towel as thick as my hand!

This is my message for Eric:
Don’t even think about it. Liv’s already taken!!!!!

Hodge and Podge, you would make great swimmers! If you’re ever in Florida, let me know, and we can get together for a swimming lesson! Grace has a giant casserole pan that she fills with water. It’s the perfect size to swim laps in :).

I have a problem that maybe you all could help me with. Grace and Liv taught me to crochet acorns, but they always come out smelling like chlorine (pool water) when I make them. How can I prevent that??? 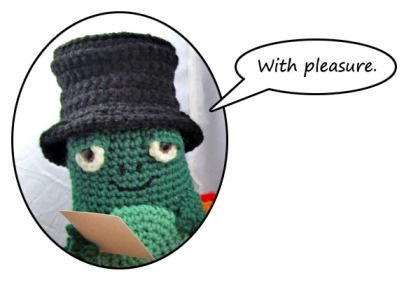 It’s so exciting to make new squirrel friends! Especially ones as talented as you all are. To think, now we can root for someone in the Olympics and tell everyone that we know Andy the squirrel swimmer!

We’ll let you know if we ever make it to Florida. In the meantime, we’ll try your casserole swimming technique! We will have to crochet ourselves some swimsuits first. Podge says, “Can you picture Hodge in a Speedo? Haha!” Hodge says, “Hey now. I would look fabulous in a Speedo. You don’t even know.”

We’ve given your acorn dilemma some thought and we think we’ve come up with a solution. It’s pretty cool that you can crochet while swimming. Have you heard about the person who knits while running marathons? How about crocheting them with plastic lacing or even plastic bags cut into strips? 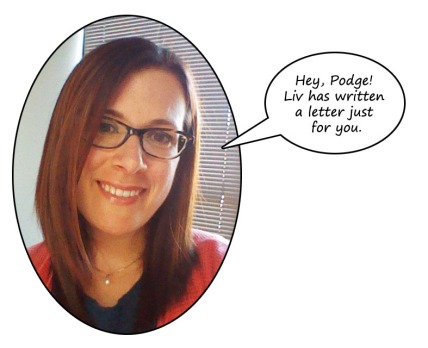 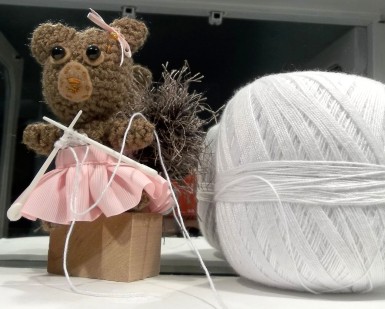 Your flower is so pretty! And your tail is so fluffy and beautiful! Mine is trimmed short like Andy’s because I’m a dancer (I take lessons from Grace) and it gets in the way when it gets long. I’m so excited to have a girlfriend all the way in Colorado!!! I knit too, as you can see in some of these pictures. I REALLY need Grace to wind me a little ball off of the big one. It’s really hard to move with THIS attached to my knitting! She said as soon as I can decrease and increase, she’ll teach me lace and entrelac, too!!! What’s your favorite thing to knit or crochet for Hodge? I’m trying to think of something I could knit for Andy. Do you think he’d like a scarf?”

I’m so excited to have a girlfriend in Florida! I think your tails are very fashionable. Last year I cut my tail short and it still hasn’t grown back! Thank you for telling me that my tail is fluffy and beautiful. I’m always feeling self-conscious about it, but you’ve made me feel more confident.

I love your hairpin knitting needles. I usually use toothpicks. I’ll have to try it your way sometime. Is entrelac very complicated? I have to admit, I’ve been to scared to try it. My favorite thing to knit for Hodge? I like to knit him hats and scarves. They’re the quickest. But I have a special surprise I’m making him for Valentine’s Day. I can’t tell… he’s standing right here, but you’ll see it soon. I think Andy would love a scarf, especially if you made it yourself. Handmade is always the best, in my opinion.

Thank you for writing to us all at the picnic and sharing your talents with us. Hodge and Podge and I (and all the rest) are so impressed by your skill as a fiber artist and writer. It means so much to me that you used my pattern to crochet Liv and Andy, but you gave them their shining personalities, and for that you should be especially proud. Best of luck to you in all your endeavors, to Andy in his swimming, and to Liv in her dancing and knitting. Keep in touch, okay?

If you have a letter for the gang at Squirrel Picnic or if you’ve made a character from one of the patterns, I’d love to see it and possibly feature it here on the blog. Hodge and Podge love to make new friends! Please see the submission section of the About page for details or write to squirrelpicnic{at}gmail{dot}com.

20 thoughts on “Pen Friends: Greetings from Grace W. in Florida!” 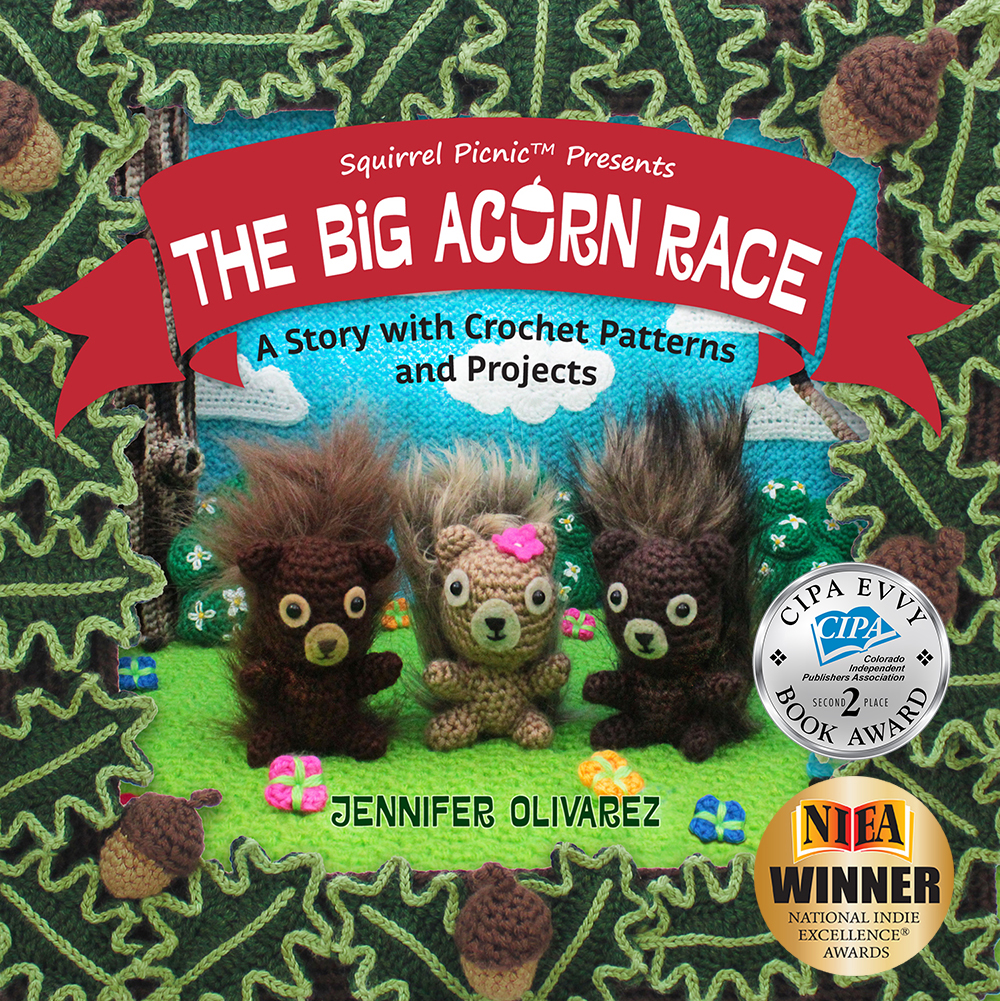 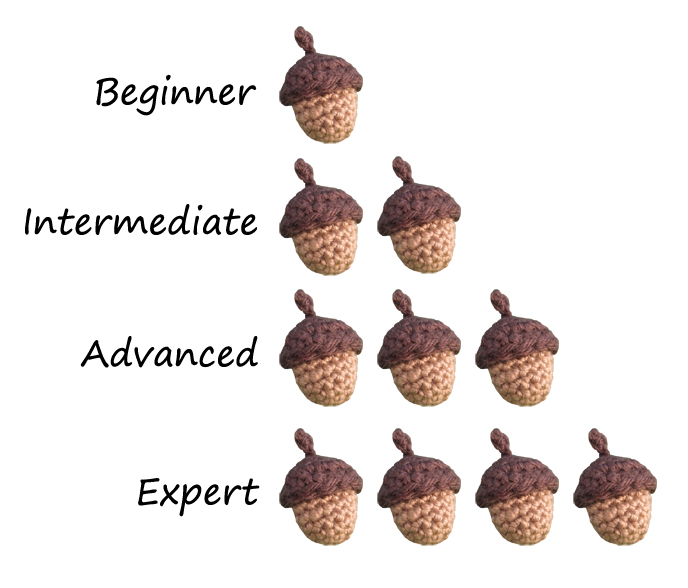 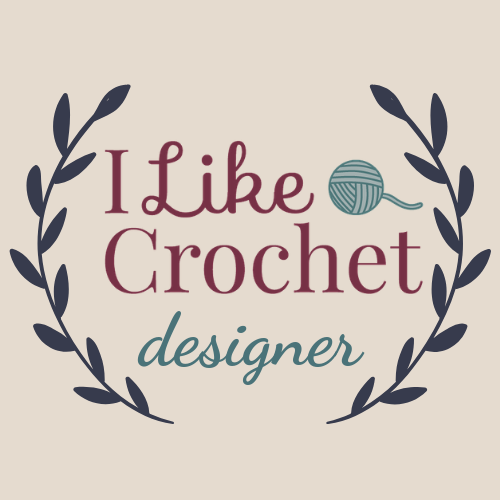 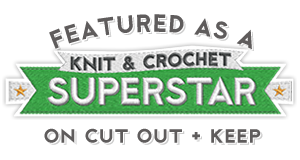